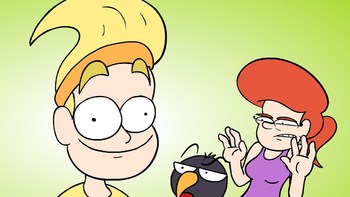 . It is a comedy series mostly created in Blender that tells the stories of three characters. There is Petri Taipale, an awkward and antisocial boy who has been shown to have cartoon logic. He is afraid of insects. Heli Palo is a girl who is, simply put, the serious one. She's a gamer and her room is covered in posters, which mostly promote the animator's other series. Her lines usually make sense, and she also owns the house the protagonists live in. Then there's a small talking bird Raineri Kottonen which is created to resemble a starling[2]

. He is a Cloudcuckoolander. For example in one rejected script, he explains that drinking lots of coffee speeds up one's time. According to Raineri, time is like a car driving down a street and if it goes too fast, it might crash and stop completely, and when a car crashes, it is towed away. This apparently results in the person traveling to the past because the tow truck drags the car in the opposite direction.
Advertisement:

is where Petri moves in. It begins with Heli struggling with a boss in a video game called Filt Fighters. When she asks Raineri to help, he suggests asking the new roomie who just moved in. She refuses and Raineri asks him to play with her anyway. He is incredibly bad at the game and Heli loads the tutorial which hypnotizes him to start punching Raineri, also allowing Heli to control her with a controller. She tries to fire the "Super Mega Double Super Blaster Ultra Super Giga Super Hyper Super Gun" which works but is comically delayed. He destroys the TV with a Hand Blast and gets unhypnotized.

In the second episode [4]

Heli drops ketchup on the floor, which results in a silverfish invading. Petri freaks out and throws it out with a glass and a cup. At night, Petri buys insect growth hormone online and puts some on the living room floor. Petri throws out the grown insects. Each night Heli pranks Petri with more and more growth hormones before Raineri accidentally eats the growth hormone and leaves the whole jar out in the open. This results in giant man-sized silverfish that trap Heli. Raineri, now grown to a large, muscular humanoid, shows up and says "The early bird gets the worm" before saving Heli and shrinking back to normal. The episode ends in Petri cleaning the house and installing a new TV.

starts with Raineri not finding anything interesting on TV, which results in the crew going to a flea market. In an attempt to get rid of Petri, Heli asks for several items, including a yellow doll with a banana for hair that says "I'm awkward in social situations", a game called "Filt Fighters Hyper Bläster Umm Battle Brawl 2 DX", the legendary Sampo, Bigfoot, Petri's brains, and a Russian dollar. Later, Raineri and Petri get stuck inside of the flea market's TV where they can summon any item instantly. They try to perform several shows to get Heli's attention before Heli gets enough and breaks the TV and frees Petri and Raineri. Then it becomes clear that she was watching through her portable gaming console's reflective screen all along.