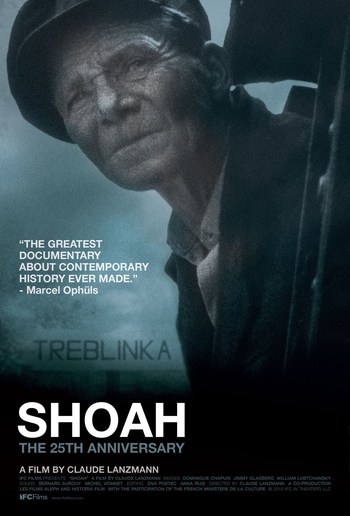 Job satisfaction is making the trains run on time.
"If you lie enough, you believe your own lies."
— Franz Suchomel
Advertisement:

Shoah is a 1985 Documentary by Claude Lanzmann about the extermination of the Jews in occupied Europe. It was highly influential, and it was the first nonfiction film many had seen on the topic. It was part of the wider interest in Nazi and collaborationist atrocities which appeared in the late 1960s (and featured so heavily in the cultural 'Revolution' of May '68).

Between 1976 and 1981, Claude Lanzmann interviewed many protagonists of the Holocaust, both survivors, bystanders and former perpetrators. His film, clocking in at nine hours, is a collection of these interviews, interspersed with shots of the ruins of the extermination camps. There is, however, no archival footage whatsoever, and the horror is made all the greater by the audience having to rely on oral testimonies to imagine it, rather than actually being shown.

Many of the interviewees viewed themselves as having been "cogs in the machine" - people just doing their jobs, regardless of what that job involved, because if they hadn't done it then someone else would've... and that that someone else might have made things 'worse' (somehow)

. The abnegation of personal responsibility was endemic among unenthusiastic perpetrators of the Holocaust: if they didn't blame other people for 'forcing' them to do evil, they would have to think of themselves as evil. And that would be terrible.

The ordinary nature of the interviewees the film also makes it an excellent illustration of what Hannah Arendt dubbed "the banality of evil".