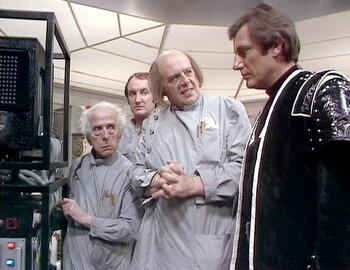 With hair like that, he's got to be a Mad Scientist.
Written by Robert Holmes.
Directed by Brian Lighthill.
Airdate: 7 December 1981.
Advertisement:

A renegade scientist called Egrorian has invented the ultimate weapon, and is willing to give it to the Seven in exchange for Orac. But Avon suspects that Servalan is behind it all, and so an intricate game ensues with both parties trying to outsmart the other. Before the episode is over, Avon will have to decide just how much he's willing to sacrifice for his own self-interest.