Film / The Mountain of the Cannibal God 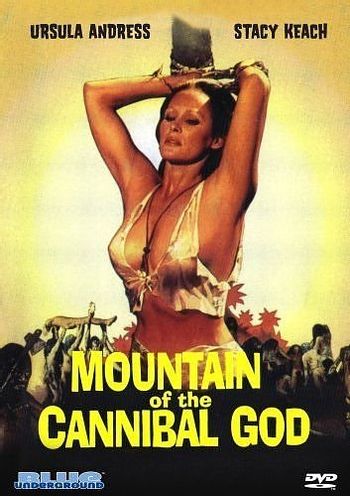 La montagna del dio cannibale (The Mountain of the Cannibal God), better known in America as Slave of the Cannibal God, or in the UK as Prisoner of the Cannibal God, is a 1978 exploitation horror film directed by Sergio Martino. As one of the only cannibal films to feature mainstream actors (Ursula Andress [Dr. No] and Stacy Keach [Titus]) and get a mainstream US theatrical release (from New Line Cinema), it managed to achieve some measure of notoriety, though its fame has since been eclipsed by its more infamous kin, like Cannibal Holocaust or Cannibal Ferox.

Ursula Andress plays Susan Stevenson, who is trying to find her husband Henry, an anthropologist who went missing in the jungles of New Guinea. She and her brother Arthur enlist the services of Professor Edward Foster (Stacy Keach), who thinks her husband might have headed for the mountain Ra Ra Me. Ignoring both the locals (who say that the mountain is cursed) and the local authorities (who say pretty much the same thing), they set out in search of Susan's husband.

Needless to say, things turn out badly for everyone involved.

This film, like a lot of cannibal films, was listed as a Video Nasty, but was taken off the list after just two years and given a 18+ rating by the BBFC. The film has since fallen into the public domain, and is available in cut form on a zillion cheap DVD sets. It's also had uncut Region 1 releases from Anchor Bay and Blue Underground.