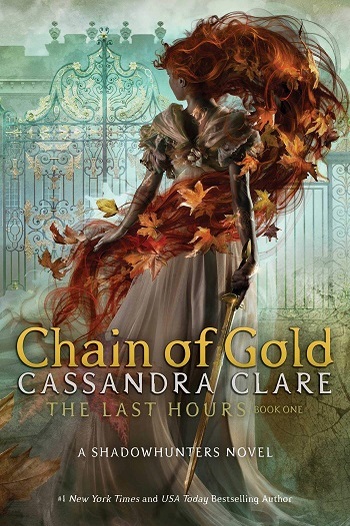 The Last Hours is a Young Adult Literature, Gaslamp Fantasy trilogy by Cassandra Clare. The fifth in her overarching The Shadowhunter Chronicles, it is a sequel to The Infernal Devices, taking place 25 years after the events of that series, during The Edwardian Era.
Advertisement:

Cordelia Carstairs, a young Shadowhunter from Devon, has spent her entire life moving from one Institute to another to accommodate her father's illness. When her father ends up accused of a terrible crime and imprisoned in the Shadowhunter capital of Alicante, Cordelia and her mother and brother, Alastair, move to London, where they are greeted by the Institute's head, Will Herondale, his wife, Tessa Gray, and their two children, James and Lucie. Cordelia has been acquainted with the Herondale children for years; she is planning to become parabatai with Lucie and secretly in love with James, even though he does not seem to reciprocate her affection.

Although moving from the quiet life of the countryside is hard, Cordelia slowly adjusts herself to the hectic political and social life of the London Enclave. However, just as she is beginning to settle down, the Enclave is rocked by a series of demonic attacks. These attacks are nothing like any other before; the demons are capable of walking in daylight and infect Shadowhunters with a deadly poison. As they work to stop this madness, Cordelia and her friends discover that the answer might lie in the dark powers possessed by some of them — powers that will force them to make a terrible choice.

The story focuses on the next generation of the Shadowhunters of the London Enclave, including the children of the main characters of The Infernal Devices. The series' lead narrator is Cordelia Carstairs, cousin of Jem Carstairs, and the other major narrators are the children of Will Herondale and Tessa Gray, James and Lucie. The children of the Fairchild, Lightwood, and Blackthorn families also play major roles. Unique in The Shadowhunter Chronicles, the series features flashback chapters in between the main story, set at many different points prior to 1903.