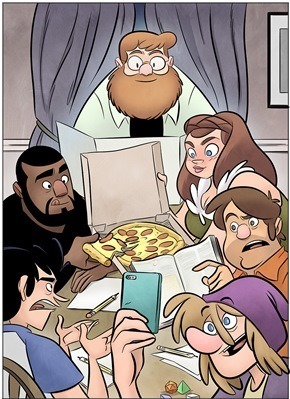 Table Titans is a webcomic by Scott Kurtz that follows the titular group of Dungeons & Dragons players and their misadventures in and out of the game, mixing gamer humour with Deep-Immersion Gaming. It's a spinoff of Kurtz's long running webcomic PvP and ties in heavily with Wizards of the Coast's latest D&D products. Seasons 1 and 2, "First Encounters" and "Winter of the Iron Dwarf", focus on the titular group and their adventures in the Forgotten Realms, while seasons 3 and 4, "Whispers of Dragons" and "Road to Embers", focus on their rivals, the Dungeon Dogs, in the custom Fallen Veil setting. It can be found here http://tabletitans.com/

Tropes in this webcomic include: