Fanfic / MLP Next Generation: Love Conquers All! Avarice Takes It All! 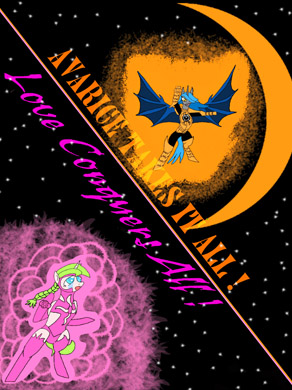 MLP Next Generation: Love Conquers All! Avarice Takes it All!

is a crossover between My Little Pony: Friendship Is Magic and the Green Lantern series being writtenby Michael_Ravencroft

. It is a direct sequel to MLP Next Generation: Know Fear!

; Daughter of Princess Luna and Supernova

Anthea, in the wake of Starburst departure, wants nothing more than to find the mare she called friend, and reunite her with her mother, Twilight, and her newfound love, Golden Delicious. But Annie knows that in the face of the overwhelming power that Starburst possesses, she need power just as great to rival that of the Fear Lantern’s. Unfortunately, during a harrowing event, Annie’s plans may be skewed slightly when a delegation to the Mintoaurs takes a turn for the worst, to keep love alive, and to find the missing mare Annie must shine with violet light…

Nidra, having lost her best friend, and angered by the actions taken by her fellow Royals, seeks comfort in the dragon-pony stallion, Turquoise. Seeing that Annie is away on a mission with High Princess Twilight, Nidra sees this as an opportunity to show Turquoise Blitz just how much she loves him. But, when things don’t go as planned, Nidra will need a little help, and that help comes in the form of orange light. After all, avarice is just another form of love, right…?

Love Conquers All! Avarice Takes it All! provides examples of: