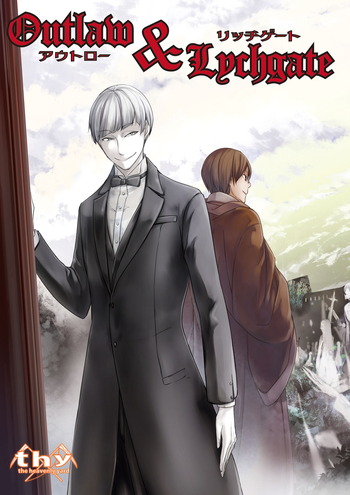 Outlaw & Lychgate is a multi-chapter short story penned by mothy, illustrated by Ichika, and released on April of 2019 for VOCALOID MASTER 42. The story is set after the events of master of the heavenly yard and as such contains heavy spoilers for the events of that novel, and for the series itself.

The story centers on Lich Arklow, one of Banica's loyal servants and a former forest spirit that was introduced in previous installments. Allen and Riliane succeeded in creating a new world, and by now most of the souls in the Third Period have already moved on to it through a gate in the former Millennium Tree Forest. Meanwhile, the King of Lucifenia, Arth, Lich to investigate the sudden appearance of the Undead Soldiers known as "Outlaws" that have mysteriously appeared in the south, souls that haven't been able to move on because their bodies haven't died.

The story explores Lich's past in the Second Period and his relationships from then and now, while expanding a little on the various "endings" and alternate worlds presented in master of the heavenly yard.