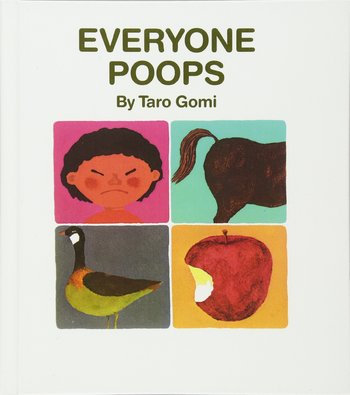 Everyone Poops, also known in some countries as Everybody Poos, is a children's book by Taro Gomi, first written in Japanese.
Advertisement:

It is a semi-educational book with no plot about how all animals (including humans) poop, with some comparisons (e.g. an elephant makes a big poop and a mouse makes a tiny poop), and questions (e.g what does whale poop look like?). It also discusses the scatological habits of some animals and briefly makes a link between eating and pooping, though it doesn't actually explain what happens in between.

Because it is a relatively well-known book and because it's about poop, it's often referenced as a joke in various works.

Everyone Poops provides examples of...