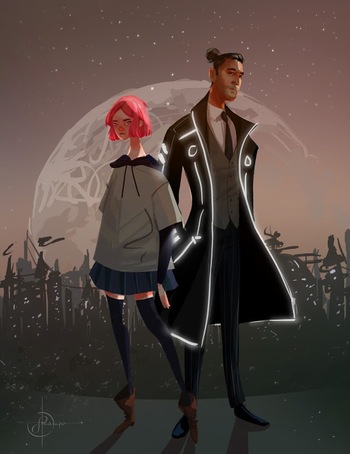 is a Web Serial Novel written by Joaquin Kyle Saavedra, with the cover art by Adel Ocampo

. It updates every week, serialized on Wordpress, currently on its second arc. It is set within the Universe of the Oeuvre, on the Material Plane of the Mund.

The story focuses on the lives of Chrysanthemum and Quinen, living in a City of Adventure known as Throne City, as they try to survive in a cutthroat world. Chrysanthemum is a strange, amnesiac girl with glowing pink hair, who seems to have qualms about the modern life in the Third Age. Quinen, on the other hand, is a rebel. Given the moniker Warlock after a certain incident that caused him to be kicked off of the Collegium, a Wizarding School that floats within the city.

The work has been called as New Weird extensively by the author, but also fits in the category of Urban Fantasy. It has Cyber Punk and Urban aesthetics, with Magick powering computers and the plane of information known as the Datascape being a power source the Mages can use, allowing Technothurgists to exist. It's a weird mish-mash of Sci-fi and Fantasy tropes, bordering on Science Fantasy.

The Reverie is not limited to just Chrys and Quin, though. There is also the Thousand Wisdoms Bestiary

filled with stories about the various mythical creatures that exist within the Constructed World.

focuses on shorter stories set in the world, but not limited to Throne City.

entry is the Cosmic Codex, an ethereal, Great Big Library of Everything of sorts made to show the more technical aspects of the Worldbuilding for the Oeuvre. The origins and the aspects and information about the Cosmic Codex is generally unknown.