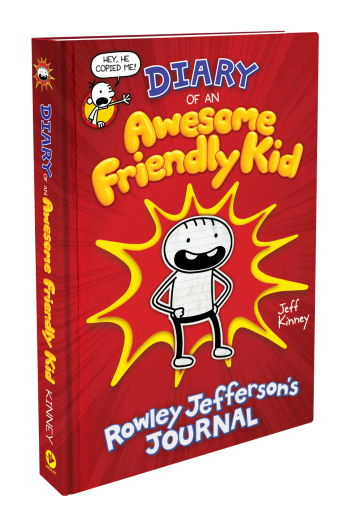 Get ready to see the Wimpy Kid world in a whole new way!
Rowley: Hi! I'm Rowley Jefferson and this is my book! Now I have a diary just like my friend Greg!
Greg: It's a journal! And he totally stole my idea!
— Dialogue from the official trailer

Diary of an Awesome Friendly Kid

(also known as Diary of an Awesome Friendly Kid: Rowley Jefferson's Journal) is a Spin-Off of Jeff Kinney's series Diary of a Wimpy Kid, told in a Perspective Flip written by Greg's best friend Rowley Jefferson. It was released on April 9th, 2019.

On February 13, 2020, a sequel called Rowley Jefferson's Awesome Friendly Adventure was announced. It was originally planned to be released on April 7, 2020, but was delayed to August 4, 2020 due to the coronavirus pandemic. This book is presented as Rowley's in-progress manuscript for a fantasy novel, interspersed with his comments on how Greg's suggestions for it — most of which relate to its potential for marketability and merchandising — are affecting the story as it unfolds.