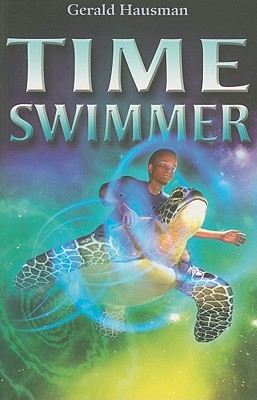 Timeswimmer is a novel by Jamaican author Gerald Hausman, published in 2008 as part of the Island Fiction series of stories.

Shortly after a failed suicide attempt, a young Jamaican boy named Luke Griffin meets and befriends a loggerhead turtle named Odysseus. Turns out Odysseus is the Odysseus of Greek legend, having been turned into a turtle as a way for him to atone for his sins. He is also capable of time travel, and has been doing so throughout the ages, doing good wherever he can across various locations and time periods. And now, he needs Luke to help him on this latest stretch of the journey.

What follows is a series of increasingly bizarre adventures as Luke and Odysseus must outwit godlike figures, rescue various beings from death, fulfill specific tasks in each time-period they visit, and all the while avoid the machinations of the sadistic water-god Poseidon-Agwe while keeping the aforementioned godlike figures entertained with occasional stories, brought on by Luke's emerging storytelling abilities...

And yes, the novel's title is read as one word, not two separate words.