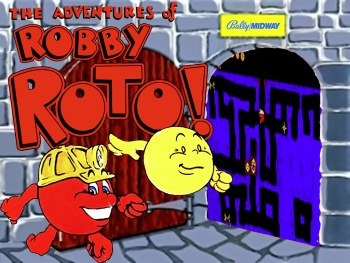 The Adventures Of Robby Roto is a 1981 arcade video game by Bally/Midway, developed by Jay Fenton. In the game, you control the main character Robby, who must rescue three of his friends who are trapped in the mines of the evil Voltar, all the while avoiding creatures such as the Sinister Spider, the Wicked Troll, and the Jawbones. Once he finds a hostage, Robby must find a key in order to escape and return to the surface.
Advertisement:

The game was such a failure, with only 2,000 units produced, that its rights were reverted to its creator. At present, it is one of the games that is freely and legally available for download to use with the M.A.M.E. emulator.