Literature / They Came to Baghdad 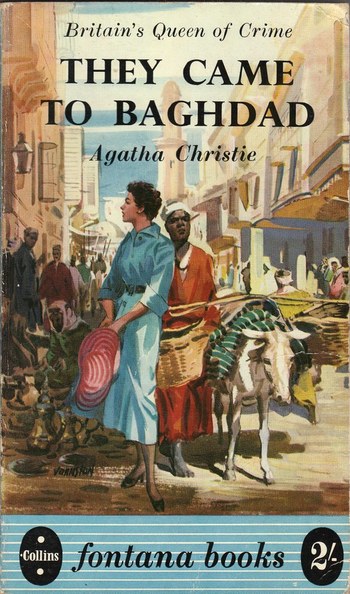 They Came to Baghdad is a 1951 novel by Agatha Christie.

It's not a Miss Marple or Hercule Poirot novel and in fact isn't a murder mystery at all. In fact it's one of a handful of spy thrillers that Christie wrote between murder stories. The heroine is Victoria Jones, a single young lady who, as the story kicks off, has just lost her job as a London secretary. While she's sitting on a park bench contemplating what to do next, she strikes up a conversation with a dashing, handsome former RAF pilot named Edward. Edward states idly that he is soon headed off to Baghdad to work for something called the "Olive Branch Foundation". They soon part company, but Victoria, enchanted with Edward, decides that she simply must rush off to Baghdad and find him again.

So she does, getting a temp job as companion to an older woman also headed to Baghdad, because Victoria can't find a ticket. She dashes all the way to Iraq without even knowing Edward's last name, but she makes inquiries and soon tracks him down. Romance is in the air...but one night, a spy named Carmichael staggers into her room, and collapses and dies, having been stabbed through the heart...

Compare The Man in the Brown Suit, a Christie novel from over a quarter-century before, with a very similar plot structure.