Literature / The Man in the Brown Suit 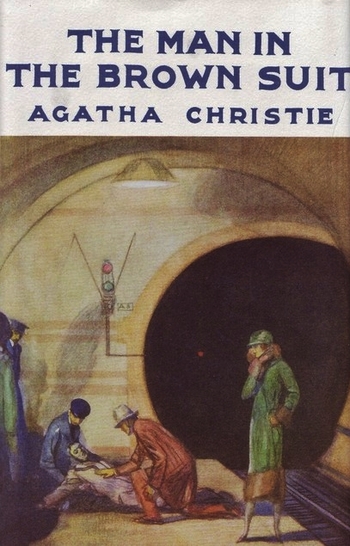 The Man in the Brown Suit is a 1924 novel by Agatha Christie.

It is one of Christie's one-off novels, featuring neither Hercule Poirot or Miss Marple. Instead, the heroine is feisty young Anne Beddingfield. Anne has been spending a rather dreary existence as housekeeper to her father, an eccentric archaeologist. When her father dies suddenly and unexpectedly, Anne fends off a job offer at the library and a wedding proposal from the local doctor, and instead hies off to London, in search of adventure.

She finds it. Anne is waiting to catch a Tube train when the man next to her gets a look of shock and horror on his face, steps backward, and falls off the platform to his death below. A mysterious man in a brown suit who acts like a doctor pronounces the man dead, but Anne finds him suspicious. She sees that he dropped a note on which is written the words "17.1 22 Kilmorden Castle." It turns out the man, one L.B. Carton, was going to see a house in London, owned by one Sir Eustace Pedler, with the intention of renting it. The next day, a woman is found dead, strangled in that same house. The suspect is a man in a brown suit who was seen leaving minutes after the woman entered.

Anne goes to the police with her suspicion that the death of Carton and the mystery woman are connected, but they blow her off. When she discovers that "Kilmorden Castle" is actually the name of a passenger ship headed for South Africa, she boards it immediately, and embarks on an adventure that involves stolen diamonds, a criminal mastermind known only as the Colonel, a rebellion in South Africa, and a mysterious handsome man named Harry who may be the man in the brown suit.

Compare They Came to Baghdad, another one-off Christie spy novel with a very similar plot structure, regarding a woman who goes off to an exotic location in search of love and adventure and finds a sinister conspiracy.