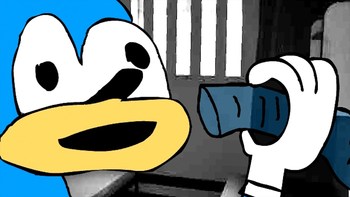 "What's wrong with watching a cartoon character get pumped full of air until he's a big mess of bulky flesh clinging together as hard as it can against the power of compressed air? If that isn't something you're into, well, you can get the heck out."-Jimberly-Chaotic
Advertisement:

Sonic Inflation Adventure is a trilogy of fan games released on Newgrounds that parody the Sonic fanbase. Created by Jimberly-Chaotic, this trilogy of visual novels were made to poke fun at the average Sonic crack fic. Most notably, it makes fun of some of the more bizarre parts of the fanbase that like to like to draw the characters taking part in their favorite fetishes. Of course, comparisons have been drawn to Sonic Dreams Collection: a fangame that does something similar. As the title suggests, it particularly focuses on one fetish: body inflation (the fetish of seeing someone inflated like a balloon).

The original game saw you waking up in the body of Sonic in the franchise's universe. You then receive a call from Knuckles, who invites you to come over to his nightclub and party with chicks. There, you come across Rouge the Bat and Amy Rose where you get the option to ask either one of them to have sex with you. Afterwards, you have one of them take part in your inflation fetish and have them being inflated with air by some crazy means of biological impossibility. Unfortunately, you accidentally over inflate them leading to them bursting like a balloon. Now you as Sonic are put on trial with Shadow as the judge and Eggman as the prosecutor and you must defend yourself using a system that references the Ace Attorney franchise heavily.

Sonic Inflation Adventure 2 Battle, the sequel, was even more out there. Its plot saw you looking for Shadow (presumably for revenge due to the court case scene) in a bar and coming across Cream's hot mom Vanilla. History repeats itself and you end up accidentally killing Vanilla. Now you're on the run from the law.

End of Sonic Inflation Adventure starts out with the same inflation madness that the first two do until you realize that the events of the previous two games were nothing but a dream and you're actually a normal person with a sucky job at the office. It goes from there into some dark commentary on how discontent people are with their lives in normal society.

Overall, the series is very NSFW, though it's not pornographic. It mercilessly tears into both the more unpleasant parts of the Sonic fanbase and DeviantArt and it does so in a way that makes Sonic Dreams Collection seem downright modest in comparison. As a result, the series is rather divisive being praised as a masterpiece (especially the last one) by some and looked down upon as a horrible piece of trash by others. The fact that the creator is a massive troll makes everything all the more interesting.

This series of fan-made visual novels provide examples of: