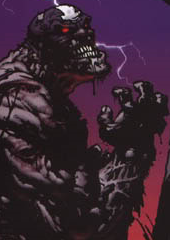 "Don't run 'cause nobody's getting out of here alive! Carajo!"

Nominal Hero par excellence, Cazador is a hedonist whose only interests are alcohol, women and football. He only answers the Call to Adventure when there's absolutely no other choice, and always reluctantly -unless the correct Berserk Button is pressed or a sufficient reward is offered to him. His backstory actually stretches back to the colonization of the Americas: he was the son of a German mercenary who arrived to the New World in an expedition led by Juan Díaz de Solís. Expelled from his town under accusations of cannibalism, Cazador led a group of fellow exiles in a bloody crusade against the natives, whom he blamed for his troubles.

During one of his brutal raids, Cazador spared a native who promised to lead him to a hill full of pure silver and food in return. He was instead lured into an ambush, where most of his men were massacred and he was taken prisoner. As punishment for his actions, the natives subjected him to a ritual by which spirits possessed his body, granting him eternal life, so that he would get to experience the pain of not being able to die. He was therefore cursed to walk the Earth from then on, becoming a bane for those around him. Accompanying this curse, there was a revelation: unbeknownst to Cazador, as his father had kept it secret from him, his own mother was a native, and she died while giving birth to him. 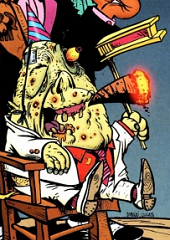 An Italian mobster who hangs out with Cazador sometimes. He considers Cazador a close friend, but the feeling isn't mutual. 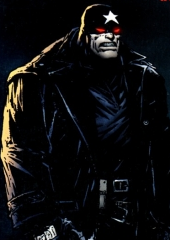 "Embrace with me the cause of freedom!"

Cazador's intelligent and polite American counterpart, real name Robert Howard. Working for NASA, he refused to take part in the construction of an explosive device using technology recovered from a UFO crash. Unfortunately, that meant he knew too much, which led to an assassination attempt in his house disguised as a gas explosion. Robert survived, but his family was killed. Angry at this, he donned the identity of Hunter to chase down and kill the persons responsible for the attack. 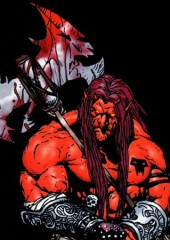 "Cry Cazador, let my victory soak in your tears."

One of the demons vying for control of Hell, he has a bone to pick with Cazador for thwarting his plans to control the mortal plane as well. 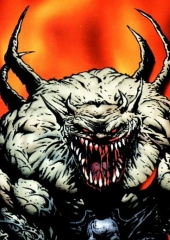 A powerful demon who can only speak in swear words, usually in long, uninterrupted strings. He shares more than a passing resemblance to the Tasmanian Devil, and characters lampshade it as a Running Gag. 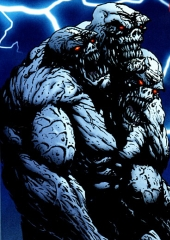 "Cazador, you will repent from the evils you inflict upon me."

Cazador's malformed brother(s) who grew out of a cyst extracted from his anus. Despite having three somewhat independent heads, he is always treated as a single entity. He has more than a bit in common with Frankenstein's Monster: abandoned by his creator/brother, and feared because of his monstrous appearance, he turns evil in frustration. In fact, many of his lines are practically lifted from the original novel; therefore, many of the tropes that apply to the creature apply to him as well. 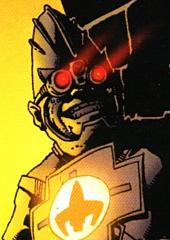 "Your kingdom has come to an end, Antichrist!"

The result of a secret Supersoldier program helmed by Reed Richards, working for NASA under orders from Stan Lee. 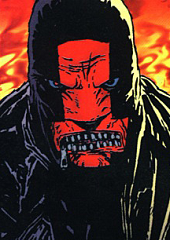 A man whose father was killed during one of Cazador's rampages when he was a kid. Cazador also pointed his gun at him, but spared him. This experience left him severely traumatized, with recurrent nightmares of Cazador. He came to believe that he was a powerful demon, and that by killing people in his name he would be able to calm his rage. 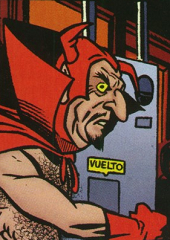 Straddling the line between enemy and mere "annoying acquaintance", Von Orenstein is a comic book store owner and amateur occultist who trusted a copy of the Necronomicon to Cazador, who never paid him back. He is obsessed with collecting on this debt. 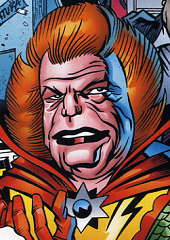 "If Cazador is the illness, we are the cure."

The leader of the League of Avenger Nannas, a group of elderly Moral Guardians who want to put an end to Cazador's indecency. 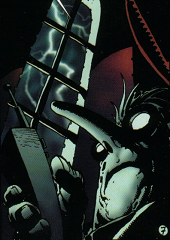 "So much power is aphrodisiac!"

The main villain of the Argentinean comic and cartoon Las Aventuras de Hijitus; here he serves as the bad guys' go-to Mad Scientist. 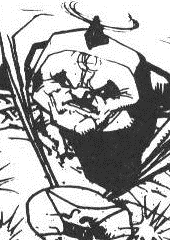 The Super Mode of Hijitus, here portrayed as an adult and involved in a homosexual relationship with his ally the sheriff of Trulalá. 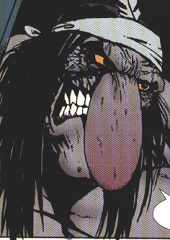 "Amalaya! I finally found you, rascals!"

One of Argentina's most renowned comic book characters, he's a wealthy Tehuelche

chieftain who's as generous as he's strong, which is a lot. He died off-panel of an unspecified ailment, but he was brought back to life later when his corpse, which had been embalmed with an experimental chemical created by Professor Neurus, was struck by lightning. 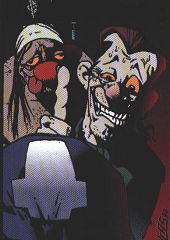 Patoruzú's godfather and brother, respectively, who are almost always paired together. They tried to use their relative's dead body to smuggle drugs around the country, but got into trouble with Cazador in the process. 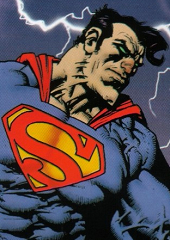 "This is a job for Superman."

The last survivor of planet Krypton, which was destroyed by the Junians because of the warmongering nature of its inhabitants. He lives up to that reputation while working as a superpowered enforcer for the US government, though he has plans of his own. 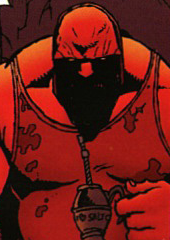 "Do you know how much money it takes to mobilize the armies? I'm broke."

Superman's arch-enemy and supreme ruler of Apokolips, though he's actually Uruguayan. He turns out to be an old friend of Cazador; they met while on vacation some time before the events of his appearance in the comic. 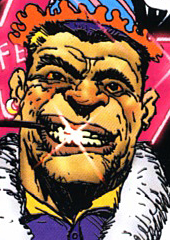 One of the most iconic (and controversial) football players in the history of the sport, and a close friend of Cazador. 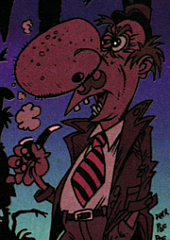 "Courage, my friend. The old English tradition calls for an iron stomach."