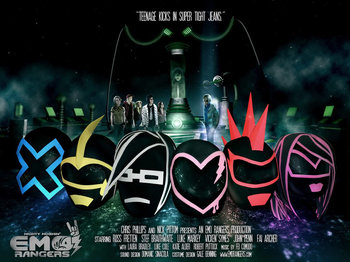 It's Moshin' Time!
Rangers, get your shit together!
Advertisement:

Mighty Moshin' Emo Rangers is an internet series parodying the popular Power Rangers TV series. The series’ takes the show’s well known premise and adds a simple twist; the team is made up entirely of Emo stereotypes.

The resulting viral video garnered a sizeable fanbase through MySpace, and a short series of edited down episodes aired on MTV.After the show’s initial success, the creators began work on a second season, which, while a significant improvement over the first, was infamously delayed for four years before finally being released in 2010, long after the series’ infamy had peaked.

In 2015, the series returned again with a Ten Year Anniversary special featuring a new Ranger, Mary Jane, the new Chronic Stoner Ranger. In reference to the infamous hiatus, the special jokingly promised that the original team would return in the year 2025. With a Christmas special announced the same year, and still not delivered on, time will tell if the Emo Rangers return.