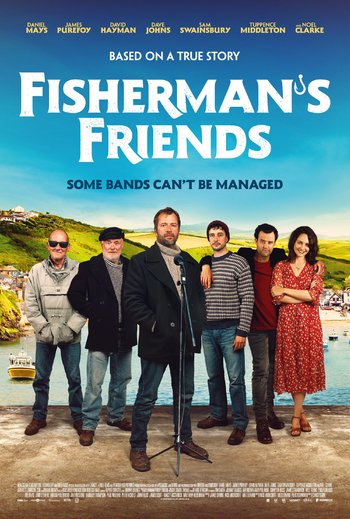 He was a fish out of water, but to get them on board he’ll need to change his tune.
Advertisement:

A 2019 British Comedy-Drama Film Directed by Chris Foggin Based on the True Story of the Cornish folk group The Fisherman’s Friends. Starring Daniel Mays, James Purefoy and Tuppence Middleton.

, his boss Troy decides to pull a prank on Danny by leaving him behind in the village and telling him that he needs to sign up a local group of fishermen, lead by grumpy Jim (Purefoy) who sing traditional Sea-Shanties, known locally as the "Fisherman’s Friends".

From there Danny struggles to gain the trust and acceptance of the group who will happily put their community first over fame and fortune. While he also begins to become enamored with the music, the small-town lifestyle, and Jim's daughter Alwyn (Middleton) and reflects on what success truly means.