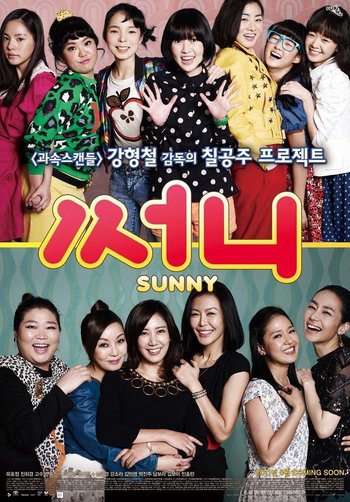 Sunny is a 2011 film about a group of old high school friends reuniting as per one's dying wish.

Im Na-mi is a woman nearing middle-aged. Despite her wealth and family, she does not feel happy. She can't help but notice her age and this upsets her. After visiting her mother in the hospital, Na-mi starts having memories of high school in The '80s. In the current day, it turns out that one of Na-mi's childhood friends, Ha Chun-hwa, is in the same hospital as her mother and is dying from terminal cancer. Chun-hwa's wish is to see their high school group of friends, which they had dubbed "Sunny", again. This causes Na-mi to hire a private detective in order to find the other members of Sunny.

Sunny was well-acclaimed and was one of the Top 5 highest grossing films in South Korea of 2011. The film was so popular that several Foreign Remakes were made. More specifically an official Vietnamese and Japanese remake has been released, an unofficial Hong Kong TV show was inspired by the film, and an American Hollywood remake is in the works.