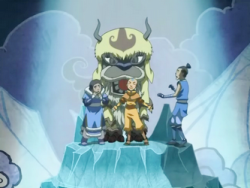 The Ember Island Players are an ensemble of actors performing at the theater on Ember Island, the vacation home of the Fire Nation nobility. They are underpaid hams who dazzle the audiences with impressive special effects and wild costumes. Two of their plays are known: Love Amongst the Dragons and The Boy in the Iceberg. Ursa, a former member of the Hira's Acting Troupe, used to take Zuko and Azula to Love Amongst the Dragons, but Zuko thinks the Players "butchered" it.

Team Avatar went to see The Boy in the Iceberg in the episode "The Ember Island Players" and considered it absolutely horrible, despite the special effects. The Boy in the Iceberg, named for the first episode of Avatar: The Last Airbender, is a highly dramatized, propagandistic, exaggerated tale of the adventures of Aang and his silly friends, who are eventually defeated by Fire Lord Ozai. The play is also commentary on Fandom. Here, then, are the Ember Island Players. Hold your applause until the end. 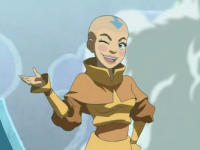 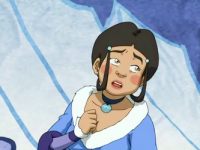 "My heart is so full of hope, that it's making me tearbend!"
Voiced by: Grey DeLisle

Player Katara is older and fatter than Real Katara, and not as beautiful. She speaks in a much huskier voice than the real Katara. Player Katara is melodramatic, prone to crying on any occasion, obsessed with hope, and does not fight. She wears her heart on her sleeve, especially in front of Player Aang. Player Katara is in love with Player Zuko, and regards Player Aang as her little brother. 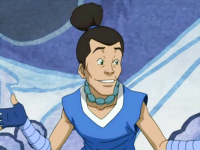 "All I want is a full feeling in my stomach! I'm starving!"
Voiced by: Scott Menville

Player Sokka is much older than Real Sokka, with buck teeth. He's a backwoods, dumb-muscle, Water Tribe hick, and the comic relief. Player Sokka is constantly hungry, and obsessed with eating meat. But the actor for Player Sokka is a pretty chill guy — when Sokka approaches him backstage with some ideas for new jokes, the actor gladly incorporates them into the scene, despite initial misgivings — ("Oh, boy, another fan with "Ideas"") and to the delight of the audience. 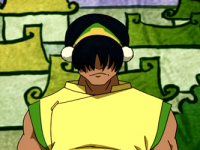 "My name's Toph, because that sounds like Tough and that's just what I am!"
Voiced by: John DiMaggio

Player Toph is a big, burly man who is blind, but can "see" using echolocation, emitting a loud scream. Real Toph likes Player Toph, saying "I wouldn't have cast it any other way." 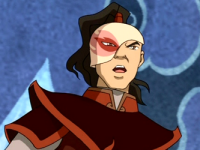 "I don't have time to stuff my face! I must capture the Avatar to regain my honor!"
Voiced by: Derek Basco

Player Zuko is more accurate than other Players, but Real Zuko considers Player Zuko too stiff and dour, and Player Zuko's scar is on the wrong side. Player Zuko is even more obsessed with honor and capturing the Avatar than the real Zuko, and shouts "honor!" more than he says anything else. He flirts with Player Katara. In Act III, he is killed by Player Azula for his betrayal of the Fire Nation.

Player Iroh is Player Zuko's doddering glutton of an uncle. He is obsessed with cake instead of tea, and is trying and failing to give Player Zuko cake. Player Iroh is betrayed and defeated by Player Zuko, which is uncomfortably close to the truth for Zuko.

"The Avatar is no more!"
Voiced by: Tara Strong

Player Azula is older than Real Azula, with a huskier voice, and wears pink, along with thick makeup and long painted nails. Player Azula electrocutes Player Aang at the end of Act II, then kills Player Zuko in Act III.

"No! It is YOOOOUUUU who are going down! You see, you are too late! The comet is already here, and I'm unstoppable!"
Voiced by: Dee Bradley Baker

Player Ozai is the Fire Lord in the play. As the play is propaganda, Player Ozai is a heroic leader, and he looks much more like the real Ozai than any of the Players look like their characters. In the climax of Act III, he kills Player Aang with the power of Sozin's Comet and conquers the World.

Player Mai looks similar to real Mai, albeit with a few differences. Her belt has a sad face on it, her fringe covers her eyes, and she keeps her knives in her "ox horn" hair.

Player Ty Lee is a pudgy ballerina. Instead of doing acrobatic stunts, she dances sedately across the stage. Instead of chi-blocking by poking people, she kisses them.

Player Suki looks very close to the real Suki, but her headdress and fans are exaggerated. She has no lines. In Act I, she trains Player Sokka in the ways of the Kyoshi Warriors.

"Riddles and challenges must you face, if you are ever to leave this place."
Voiced by: Dee Bradley Baker

Player Bumi is the King of Omashu. He wears a padded suit to simulate the real Bumi's muscles, an oversized monocle to look like Bumi's Mad Eye, and a feathered hat as a crown, which looks like Bumi's pet Flopsy. Player Bumi speaks in rhymes. 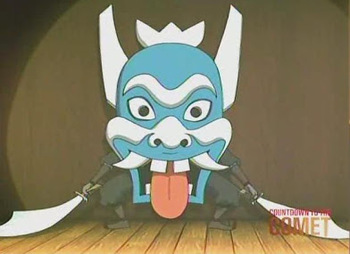 "I am the Blue Spirit, the scourge of the Fire Nation, here to save the Avatar!"

A mysterious anti-Fire Nation figure in a gigantic blue oni mask who appears to save the avatar from Zuko.

(Normal)"Don't cry, baby! Jet will wipe out that nasty town for you!" 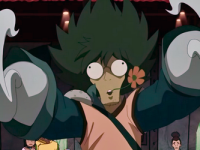 Player Jet, who has spiky hair and chews on a flower, appears in two scenes. In Act I, he floods a village to impress Player Katara, who hugs him and says "Oh Jet, you're so...bad...." In Act II, he appears in Lake Laogai, and is presumed dead when a rock lands on him. He is Brainwashed in that scene, as indicated by googly eyes. Instead of the real Jet's twin hook swords, Player Jet is armed with twin hook hands.

"Goodbye, Sokka! I have important moon duties to take care of! And yes, I did have pickled fish."
Voiced by: Jennie Kwan

Player Yue appears at the end of Act I. She wears a pink dress with many bows, and her hair is a braid attached to her hair loops. When she sacrifices herself to become the Moon Spirit, she is hoisted up on a moon prop, while Player Sokka (and the real one) grieves below.