Film / A Royal Night Out 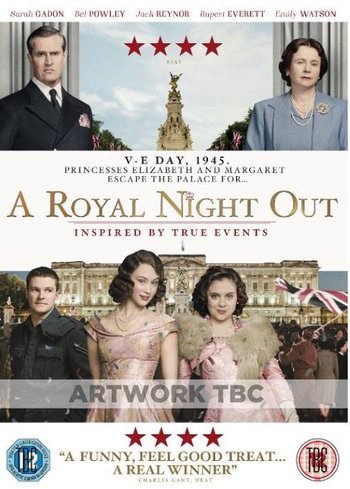 P1 and P2 ready to go.
"My sister has gone to Chelsea with a carload of tarts."
— Princess Elizabeth
Advertisement:

A Royal Night Out is a 2015 British comedy film, Very Loosely Based on a True Story. It revolves around Queen Elizabeth II back when she was still Princess Elizabeth. On the 8th May 1945, peace is declared in Europe and glorious celebrations are held. Princess Elizabeth and Princess Margaret are expected to appear in public with their parents, waving to the crowd from Buckingham Palace. But the two girls beg to be allowed to go out and celebrate with everyone else. The king and queen relent by allowing them to go to a party at the Chelsea Barracks, with two military escorts. Hilarity Ensues when the princesses decide to ditch and head out into the night.