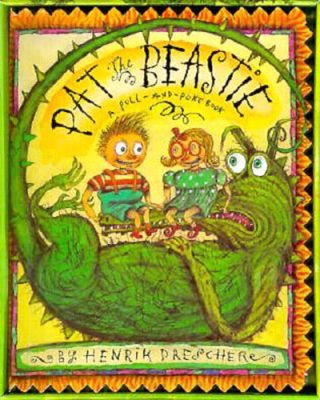 “Always be kind to your pets: or look what can happen!”
Advertisement:

Pat the Beastie is a pop-up picture book that was made in 1993 and was written by Henrik Drescher and is a dark parody of Dorothy Kunhardt's classic children's book Pat the Bunny.

In this story, Paul and Judy are two children who play mean tricks on their harmless pet Beastie. The Beastie is shown as being a large, green, scaly looking dragon creature. Paul and Judy would play tricks on the beastie that would include "jiggling the Beastie's eyes" and "poking its worm boogers." Meanwhile, a bird and a dog are constantly trying to warn the kids about not torturing the Beastie or else they will have to suffer the consequences.

A sequel was made in 2011 called Love the Beastie.

Pat the Beastie provides examples of the following tropes: