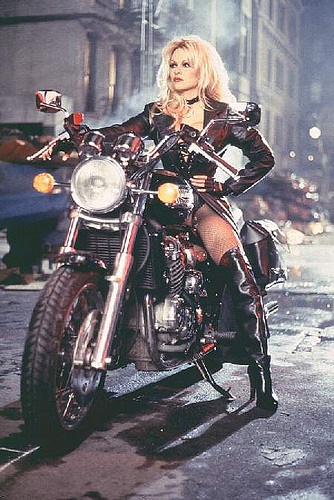 Hell must be missing an Angel. In the most literal sense, with such abysmal safety gear.
"What is it with you and bikes?"
— Enzo Matrix to AndrAIa on numerous occasions, ReBoot
Advertisement:

Compare and contrast Hood-Ornament Hottie. The two are similar, but a Biker Babe actually rides the bike and often wears outfits which are a little more conducive to road safety. (Although the page image is an exception.)

If she is introduced wearing a full helmet, you're likely to get a "Samus Is a Girl" reveal, especially if you haven't been able to see much of her body beforehand.

Essentially the Distaff Counterpart to Badass Biker, in that she won't be a pushover if things get messy, although she may be less aggressively badass than he is.

Will likely induce a Head-Turning Beauty effect on nearby males, and maybe some Stupid Sexy Flanders from a nearby female.

If you have a team composed entirely of Biker Babes, you get Amazon Brigade.