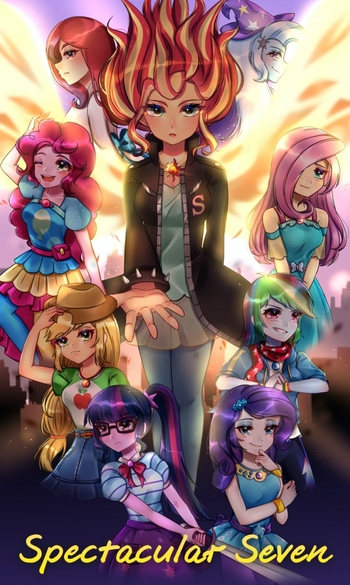 "We are the Spectacular Seven! Good night!"
Image by HanasakiYunarin.

is a My Little Pony: Equestria Girls fanfic, written by The Albinocorn. It's a sequel to Long Road to Friendship.

It is a new year for Sunset Shimmer; a fresh chance at real happiness with her five best friends and her girlfriend. But Sunset is constantly troubled by her uncertain future, and haunted by the consequences of her past. For her battle against Princess Twilight has drawn forth ancient forces with eyes on the last bastion of magic: Canterlot City.

As darkness closes in, Sunset must find her light and guide her friends to defend their world against old rivals and legends best left forgotten, all while dealing with their ever-looming futures. But when graduation comes, what will Sunset Shimmer do? For she is still a stranger in this world, with or without her friends, and the road before her guarantees nothing.

Of course, with the universe conspiring against her, the mysterious Moondancer injecting herself into Sunset's life, and a dark benefactor pulling the strings behind the scenes, it'll be a miracle if she even makes it that far...

Five volumes are planned, with a hiatus after each volume; three have been completed to date.

WARNING: Spoilers up to the end of Volume I will be unmarked.