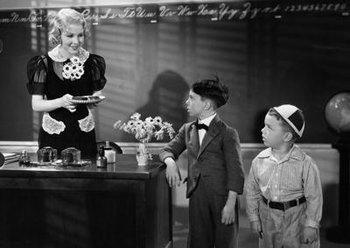 Bored of Education is a 1936 comedy Short Film directed by Gordon Douglas, starring The Little Rascals.

It's back to school day and the Our Gang kids are not happy about it—all except for Darla, that is, who brings an apple for the teacher. Spanky and Alfalfa concoct a scheme to get out of school: Alfalfa will claim a toothache and Spanky will say he has to help Alfalfa get home. To make it convincing, Spanky will inflate a balloon in Alfalfa's mouth to make it seem as if his face is swollen. However, the new teacher Miss Lawrence overhears them plotting outside the classroom window, and comes up with a surprise of her own to get the kids to come back to class.

Winner of an Oscar for live-action short film, the only Our Gang comedy to win the award.