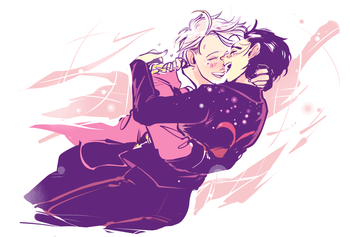 They'll get there, eventually. note  Fanart by tosquinha. Link here.

‘…Of all the rivalries in the world of sports over the years, perhaps none has become so legendary as that of Russian figure skater Viktor Nikiforov and his rival, Japanese Yuuri Katsuki…’
Advertisement:

Twelve-year-old Katsuki Yuuri attends the Junior Grand Prix Final where he meets his idol, Viktor Nikiforov, for the first time… and a bitter rivalry is born. Yuuri spends the next several years of his life dedicated to beating Viktor, but things become complicated when feelings of hatred and rivalry slowly transform into something more…

by Reiya/Kazliin is a Yuri!!! on Ice fanfic series. The first part, Until My Feet Bleed and My Heart Aches

, is from Yuuri’s perspective and the second part, Of Bright Stars and Burning Hearts

Translations for this fic can be found in: Chinese