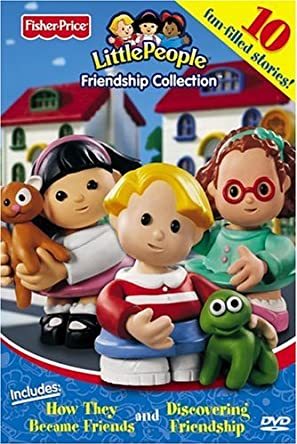 Little People is a stop-motion animated series produced by Egmont Imagination, based on the Fisher-Price toys. The series follows the adventures of Eddie and his frog, Freddie; Sarah Lynn, Eddie's sister; Michael; Maggie, and Sonya Lee.

Fisher-Price has announced a complete Continuity Reboot of the franchise on its website, now helmed by Genevieve Goings of Choo Choo Soul fame and produced by DHX Media, in cel-shaded CGI. Noticeably, this version retools Eddie, but retires the rest of the other characters, while introducing a new set of characters. This version also faces a slight genre shift as the episodes are now Web Original, only available from Fisher-Price's official video sources (i.e. their own website, and their Youtube channel).

As of March 2016, it has been spun back into a TV show. The new series airs on Sprout weekdays at 7AM. However, as of Septermber 2017, it appears that the show has been screwed over after the rebranding of Sprout to Universal Kids.