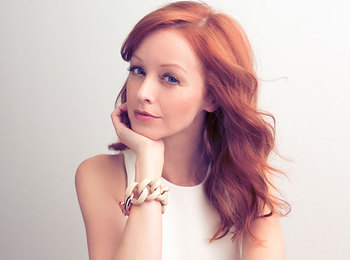 Lindy Booth (born April 2, 1979 in Oakville, Ontario) is a Canadian actor best known for her roles in The Famous Jett Jackson, Relic Hunter (as Claudia) and The Librarians (as Cassandra Cillian). Was also in Cry_Wolf and the Dawn of the Dead remake.

A red-haired lady with blue eyes, she has, to quote a Reddit AMA she did

"been murdered... or murdered someone... all over your screens big and small".