Theatre / Beyond the Horizon 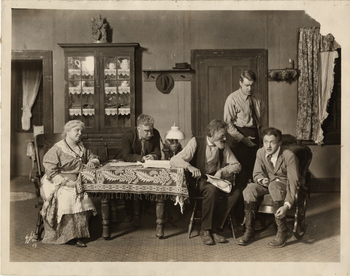 Beyond the Horizon is a 1920 play by Eugene O'Neill.

Robert and Andrew Mayo are brothers who grew up together on their family farm. Andrew is a man of the soil who takes after his father James and is being groomed to take over the farm. Robert is bookish and scholarly, was sickly as a child, and has no interest in farming, instead dreaming of going away and seeing the world. Andrew is engaged to marry Ruth, a charming girl who lives on the neighboring farm. However, Robert also loves Ruth, and she loves him, and Ruth dumps Andrew in favor of his brother.

The brothers' uncle is a sea captain, and Robert had planned to follow his dream and see the world by signing up for his uncle's ship. But after Robert and Ruth get together, Robert decides to stay on the farm, as Ruth's mother is an invalid and she doesn't want to go away. Andrew, bitter and hurt over being rejected, takes his brother's place on the ship and goes away to sea. The result is a series of disasters.