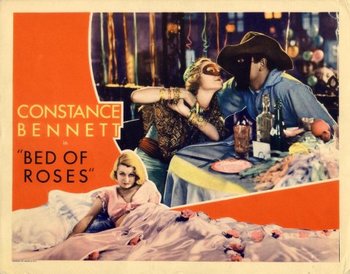 Bed of Roses is a 1933 comedy film directed by Gregory La Cava.

Lorry Evans (Constance Bennett) and her friend Madge are prostitutes who together are released from a Louisiana women's prison. They make their way onto a southbound paddle steamer, where they succeed in getting a couple of businessmen very drunk. Lorry steals $60 (in 1933 money, so, several hundred bucks in the 21st century) from one of the businessmen, but when he sobers up and figures out that she ripped him off, she jumps off the boat to avoid arrest.

Lorry manages to swim to a nearby cotton barge where she's picked up by Dan (Joel McCrea), the captain. Lorry instantly has tons of Belligerent Sexual Tension with Dan, but she lost her $60 as she was rescued, so she robs Dan too. With Dan's cash she makes it the rest of the way to New Orleans, and she manages to establish herself as the kept woman of rich publisher Stephen Paige. Lorry feels guilty enough about stealing from Dan that she makes her way back to him to repay the "loan"—and a romance ensues.