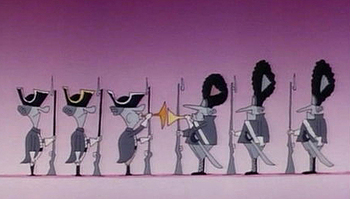 It is basically the history of the human race, or, more specifically, human conflict. A bolt of lightning from the sky ignites fire, and two cavemen fight over the heat and warmth from that fire. Conflict then cycles through millennia. In Egypt, worshippers of Anubis clash with sun-worshippers. The Roman Empire sends soldiers abroad and they bring plunder home. Kings of medieval Europe fight each other for control. The Crusades...the French and American Revolutions...Napoleon...World War II and the wars of the later 20th century...all come and go, with only one constant: that all the combatants die, and crumble to ash, and become fertilizer for the grass that grows and the grasshoppers that munch on the grass.