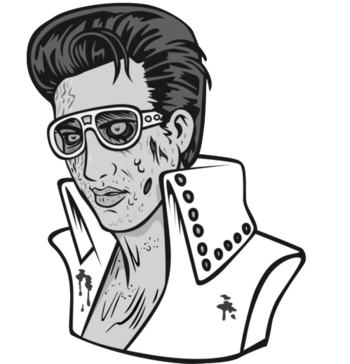 The stories about famous figures in popular music, as told on the Disgraceland

These stories and more are told by Jake Brennan, a lifelong music lover and songwriter, who was in a time of creative frustration, until he learned that his friends and family agreed that what he was best at was telling stories. As a new father, Brennan wanted to reconcile his love of these famous figures in music, despite the fact that he "wouldn’t leave any of these creeps alone with my kid." Voila - Disgraceland was born.

The show is a combination of true crime and musician biography, with a focus on a different musician or band in each episode, told by Brennan with exhaustive research through books and the internet. As Brennan often notes, his podcast is for adults only, and give a dramatized version of the chaotic lives and often criminal conduct of the musicians in question. Needless to say, this show contains a lot of content that's not for the faint of heart - there’s lots of physical and sexual violence, drug abuse and even murder. But every episode, no matter how ugly, depressing or deplorable, has one thing in common - the musicians in each episode made great music.

That link at the top? That wasn’t great music. That was a demo video for the Mellotron M4000D Mini. We gave you that link, because we can’t afford to stream “God’s Plan” by Drake.

And why would we play you that slice of pop-rap, mumble-rap cheese, could we afford it?

Because that was the number one song in America, on February 13, 2018, when the first episode of this podcast went live - an episode that surrounded the extremely suspicious circumstances surrounding the death of Jerry Lee Lewis' fifth wife, in 1983, after only 77 days of marriage.

In this podcast, car chases on PCP, crack binges, torture, murder trials, and holy shit, how are Mötley Crüe still alive?! Your narrator is Jake Brennan, and this? Is Disgraceland.

Season 5 began in March 2020. Brennan has also released a Disgraceland book and started two more pods under his Double Elvis Media: The 27 Club, where each season focuses on one artist who died at that notorious age (Jimi Hendrix being season one, and Jim Morrison season 2); and Blood On The Tracks, with fictionalized voices of celebrities telling the story of Phil Spector.

Tropes associated with Disgraceland include: