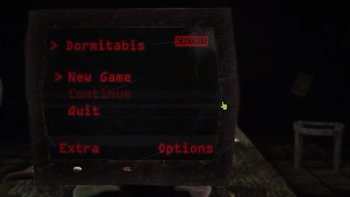 For whatever reason, you've kicked the bucket — you must've made a horrible mistake in your past that led to your undoing. Maybe you haven't. Perhaps it was on purpose... It matters nothing now — where are you exactly?

You're in purgatory, pretty much. Though if you take a look around, you may notice that it looks... familiar, too. Yeah, this place is pretty much Fredbear's Family Diner, combined with the place you were in when you died. And that place must've been filthy too, given how muddy and worn down your purgatory looks.

But you're not alone — there are some manifestations around here too. The puppet pulling their strings tried to make physical bodies for them... it failed, needless to say — and they're all probably a bit unstable as a result. But with your instructor Peter with you, you'll eventually get the gist as to how they work... even with more coming your way as your stay continues.

All you have to do is to survive for twelve nights, 10 to 7.

Dormitabis is a Five Nights at Freddy's fangame developed by Blackout. The game has been in Development Hell for the past 2 years and became a surprise release on February 25th, 2018. It serves as a fan-made epilogue of sorts to the series' story, only taking the first four games' lore into account while adding its own. You can play the game here