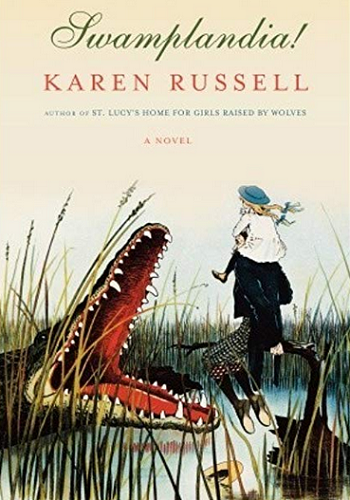 Swamplandia! is a novel released in 2011 written by Karen Russell. It is an Adaptation Expansion of sorts to a previous short story collected in the author's first short story collection, St. Lucy's Home for Girls Raised by Wolves.
Advertisement:

In the novel, thirteen-year-old Ava Bigtree has lived her entire life at Swamplandia!, her family’s island home and gator-wrestling theme park in the Florida Everglades. But when illness fells Ava’s mother, the park’s indomitable headliner, the family is plunged into chaos; her father withdraws, her sister falls in love with a spooky character known as the Dredgeman, and her brilliant big brother, Kiwi, defects to a rival park called The World of Darkness.