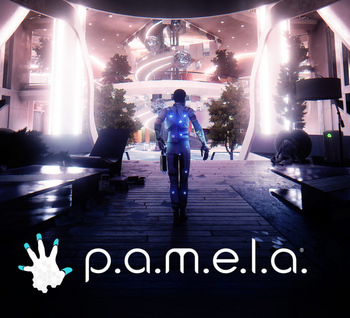 Many believed that true utopia could never be achieved. They were right.
— P.A.M.E.L.A.
Advertisement:

P.A.M.E.L.A. is a Survival Horror Science Fiction Survival Sandbox game developed and published by the Canadian NVYVE Studios. It was released for PC through Steam Early Access on March 9th, 2017, and was released in full on June 18th, 2020.

The game is heavily inspired by games like System Shock 2 and Bioshock, with the addition of survival mechanics (i.e. a hunger and thirst meter and having to manage the power supply for the city) and base-building.

In the far future of 2236, the mainland is no longer habitable, and what remains of humanity now lives on a series of utopian floating futuristic cities known as Arks. On one such Ark, EDEN 52, a horrible disease has spread. Much of the population is either dead... or worse. The AI that once oversaw the city, P.A.M.E.L.A., has awoken you, a Sleeper. Now it's your job to try and survive the fallen city and its infected populace, and find out what brought the disease that brought EDEN to its knees.