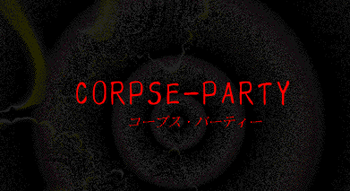 "We...may have done something irreversible. And thrown open the curtain to nightmares..."
—The tagline
Advertisement:

This is the original version of Corpse Party, created by KENIX-SOFT and developed using the Dante 98 program. It was then released in Japan on April 22, 1996. It is very different from later entries in the series with a simpler mode of gameplay, smaller cast, and a very simple story.

The story begins with Ayumi Shinozaki telling a scary story to her friends when they stay after school to clean up after the cultural festival. For Satoshi Mochida, the sound of someone knocking on the door is terrifying, but he's compelled by the others to open it anyway. To his surprise and relief, it's just his little sister, Yuka, who came looking for him. Following introductions of each character, the classmates try to tidy up the room, but they're interrupted by a strange sound. Frightened, they try to leave, but a sudden earthquake catapults them into an abandoned schoolhouse.

Unlike Corpse Party: Blood Covered, there are no shifted dimensions separating the characters, but they do decide to form two groups to investigate their strange new trappings and find a way out. Group One is composed of Satoshi, Yuka, and Naomi, and Group Two has Yoshiki and Ayumi. While Satoshi's group heads south, Yoshiki and Ayumi go north and the game follows their exploits in searching the school for clues. Soon enough, it becomes frighteningly clear that the school is haunted by the ghosts of other victims who became trapped there. It is an alternate dimension where people who are killed there cannot find peace. Both groups come across many diseased spirits, some of which are kind and helpful, while others are angry, dangerous, and psychotic. If the five teens want to live to see the light of another day, they must solve the mystery of both the school and a mysterious young girl in a red dress.

The original game has never been released in English or outside of Japan, but it's had several notable remakes so far that have been localized: an official adaptation into a PC game, titled Corpse Party: Blood Covered which expanded the story and reworked the characters; a fan made faithful remake by an anonymous member of a Japanese message board with the permission of the original developers, titled Corpse-Party =Rebuilt=

, an update of said remake with additional content and endings inspired by the rest of the franchise, titled Corpse-Party ~Rebirth~

; and finally Corpse Party: Blood Covered ...Repeated Fear, the second official remake, this time for the PSP. This page covers tropes for the original and Rebuilt.

Several Fan Sequels were inspired by this game. Corpse Party Zero serves as a fan Prequel; Corpse Party if... follows the events of one version of Ending C, and Corpse Party D2: Depths of Despair and Fatal Operation continue off of the D-2 ending. The aforementioned Corpse-Party ~Rebirth~ has additional endings that directly reference these games.