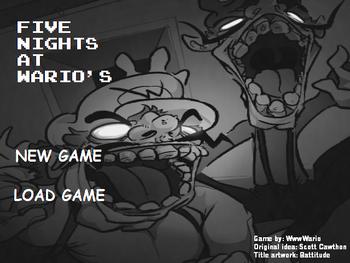 Get ready to WAAAAAAAAAAAH!
"This is some freaky shit."
—Markiplier
Advertisement:

Five Nights at Wario's is a fanmade sextology of games based on the Five Nights at Freddy's series, but featuring various Super Mario Bros. characters in the place of the FNAF's animatronics. It is made by Nintendo fan WWWario.

Each character has different ways to fend off the phantoms in each game. However, as the series progressed, the characters got more and more exposed to the fiends. The first game had the classic doors (er, one door and a window), the second one had no doors, but you were forced to hide in a generator room to keep yourself alive. The third game has the character fend for himself and have to use different techniques and rooms each night, thankfully given to you by the grateful phone calls.