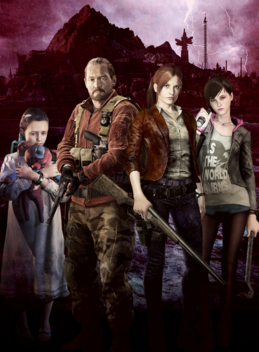 Resident Evil: Revelations 2 is an episodic game in the Resident Evil series. It has been released for the PC, PlayStation 4, Xbox One, PlayStation 3, Xbox 360, PlayStation Vita, and Nintendo Switch. In this game, returning heroine Claire Redfield and Ascended Extra Moira Burton, daughter of Barry Burton, are kidnapped and awaken on an abandoned facility. Together they work to survive a strange new enemy known only as the Afflicted. Eventually, Barry himself makes his way to the island to rescue his daughter as he finds a strange girl named Natalia, and together they search for answers.

It's the first title in the series to have an episodic release. Each chapter was released over four weeks digitally, with an additional two bonus side-story chapters with the fourth episode.

A physical disc was released in March 18, 2015. It includes all of the previously-released content as well as extra costume DLC.