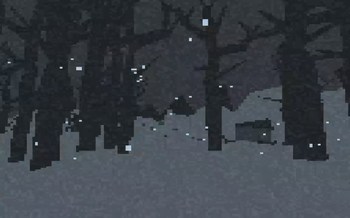 HIDE is a short freeware Survival Horror game for PC by Andrew Shouldice. Made

in 2011, it's likely the direct inspiration for Slender.

It takes place in a snowy, night-sunken forest patrolled by shadowy, flash-light wielding enemies as a loud alarm bellows throughout the background. The player must evade the spotlights of enemy patrols and the helicopter watching from above as they find five locations, each housing notes reading out a specific crime.