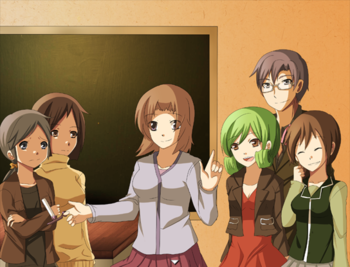 The wounds of the past still haven't healed.
Advertisement:

A 2013 Fan Sequel to the original Corpse Party, designed by Jackkel Dragon and illustrated by Katagayri. Like its fellow fan game Corpse Party if..., Corpse Party D2: Depths of Despair expands upon one of the Multiple Endings to Corpse Party (PC-98). Specifically, Ending D-2, where Yoshiki and Yuka were killed in Heavenly Host. Unable to accept this, Ayumi convinced Satoshi that they should try to change their friends' fate...

Six years later, Ayumi is invited to join several of her old classmates at a reunion held in their old classroom. But the past comes roaring back to haunt them, as Ayumi once more finds herself stranded in the cursed halls of Heavenly Host.

Notably, while based off of the original version of the game, D2 brings in several of the additional classmates introduced in Blood Covered. It also more closely follows the graphical style of those games, with similar sprite work, larger Character Portraits, and event CGs.

Currently in its ninth version, which is three chapters long and can be found here

. Followed by a sequel to one of its endings, Corpse Party D2: Fatal Operation, and an indirect sequel, Corpse Party D2: Zero Hope. A modified remake of the game is in production, which is currently in its first demo version.

This Fan Game contains instances of: