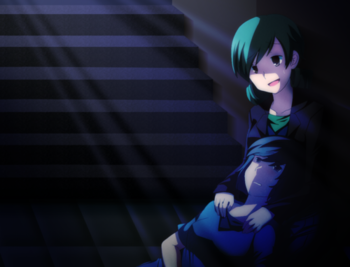 And again trapped in a closed space.

The story of Heavenly Host is not the only urban legend in Tenjin. Decades ago, a hidden operating room was found underneath the local Divine Blessing Hospital. Rumors swirled that a rogue doctor held horrifying experiments down there... But before the truth could be revealed, all information about the doctor and his work seemed to simply disappear.

Corpse Party D2: Fatal Operation is a companion story to the Corpse Party Fan Game Corpse Party D2: Depths of Despair. Set several days after the 'Mended Soul' resolution, it follows Naomi as a typical day at her job gets turned on its ear. She, along with her dear friend Seiko and four others, finds herself drawn into a cursed version of the old hospital, where they may learn the truth about that old legend... provided they survive.

The Demo version (v6) is available for download, and can be found here

Unrelated to the Interactive Movie D2.

This Fan Sequel contains examples of: