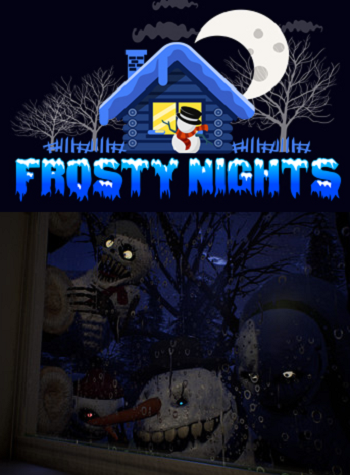 Welcome, children, to a wonderful, magical, yet grizzly story that old Nicholas never wanted you to know.
Advertisement:

Frosty Nights is a Five Nights at Freddy's-style Survival Horror game by Barry McCabe (also known as Clockwork Wolf), who is best known for his Boogeyman games. It was released for PC through Steam on December 8th, 2017.

A young child has spent a day building a snowman before being called in by their mother. That night, the mother tells them to get to bed early so they can be ready for school tomorrow, and warns them against listening to scary stories because they give them nightmares. Guess what they decide they're gonna do next.

So, yes, that night, the child finds they're being visited, and the unexpected company isn't friendly. Luckily, they've got a flashlight and a hair dryer, so as long as they keep their eyes on all the entrances to their room, they're set.