Characters / Shadow of the Colossus

Keep in mind that everyone is subject to Alternative Character Interpretation in this game. Oh, and there may be spoilers. 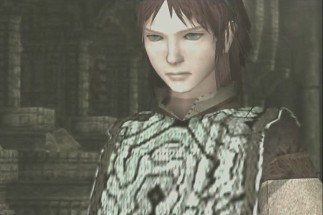 "She was sacrificed for she had a cursed fate. Please... I need you to bring back her soul..."

A young man who has come to the Forbidden Land to revive Mono. Word of God has it he's the progenitor of the horned boys in ICO, more or less the only solid thing besides an Easter Egg connecting the two games. 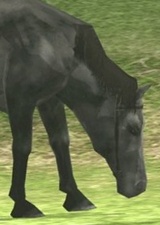 Voiced by: Hitomi Nabatame (yes, she has a voice, although you only hear it distantly) 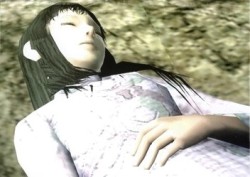 A beautiful maiden who Wander knew personally. The object of his quest is to bring her back to life after she was sacrificed.

Some kind of sealed-off entity or entities — They talk in two voices and refer to Themselves with plural pronouns. Credited with being able to control creatures made of light and to bring back the spirits of dead mortals. Wander makes a bargain with Them to bring Mono back to life that involves breaking Dormin's seal by killing the colossi. 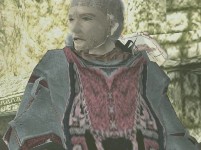 Appears to be some kind of holy man and/or knight. His mask shows up in Wander's memories to describe the Forbidden Lands where Dormin dwells. Turns out he's tailing Wander.

The sixteen stone giants that must be slain for Wander to complete his quest.

Although unnamed in the game itself, a list of nicknames

has circled for years, claiming that Word of God released them. While these names are in no way official, they are used ubiquitously enough in the community to be freely applied to this page. The other names listed here (before the slash) are the ones that were used in development, which were discussed in a December 2nd, 2005 Famitsu interview with director and lead designer Fumito Ueda here

). Along with the names, there are also Latin names for each

that resemble species classifications, which shall be included in each folder.

Tropes common to all colossi
Advertisement:

Beware possibly-unmarked spoilers for their strategies!
I — Minotaur A / "Valus" 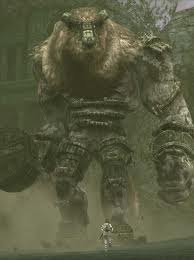 "Raise thy sword to the light... and head to the place where the sword's light gathers... There, thou shalt find the colossi thou are to defeat."

Colossus number one. Resembles a minotaur. 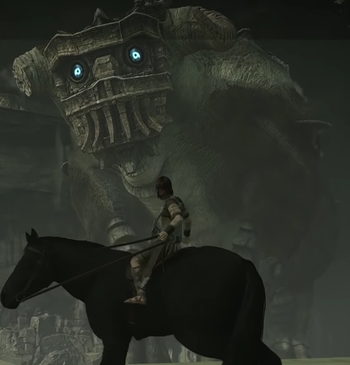 "Thy next foe is... In the seaside cave... It moves slowly... Raise thy courage to defeat it." 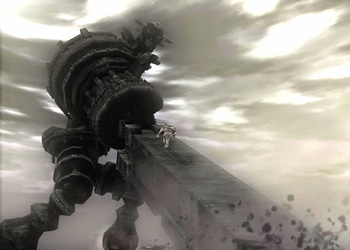 "A giant canopy soars to the heavens... The anger of the sleeping giant shatters the earth..."

Colossus number three. Takes the appearance of a knight or soldier with a huge "blade". 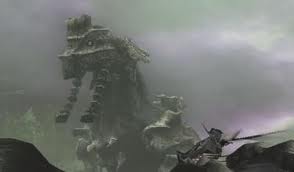 "In the land of the vast green fields... Rows of guiding graves... It is giant indeed, but fearful, it is not." 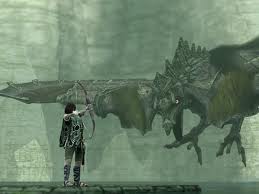 "It casts a colossal shadow across a misty lake... as it soars through the sky... to reach it is no easy task."

Colossus number five. Resembles a bird of prey with a very long tail. 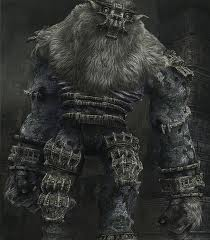 "A giant lurks underneath the temple... It lusts for destruction... But a fool, it is not."

Colossus number six. Resembles a bearded minotaur, or a behooved man-giant if you want to quibble over terminology. 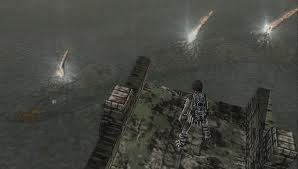 "A ruin hidden in the lake... A ripple of thunder lurks underwater."

Colossus number seven. Calls to mind a catfish crossed with an electric eel.

Parietinae Umbra (The Shadow of the Ruins) 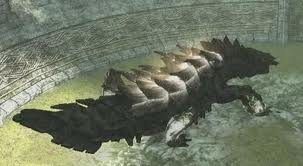 "A tail trapped within a pail deep within the forest... A shadow that crawls on the walls."

Colossus number eight. Resembles a club-tailed gecko. It can climb walls even more easily than Wander can and spits poison.

Nimbus Recanto (The Storm's Echo)note This is fragmented Latin and the translation is a generous approximation, these words would not flow together otherwise 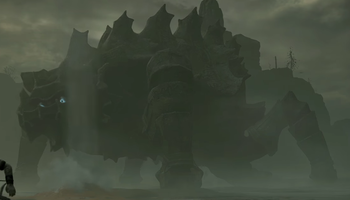 "The land where trees nary grow... It sleeps in a dry lake bed... A rude awakening."

"An isolated sand dune... Its tracks are well hidden... Shaking the earth, its gaze is upon thee..." 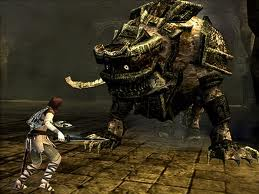 "An altar overlooks the lake... A guardian set loose... It keeps the flames alive."

Colossus number eleven. One of the two smallest colossi at about elephant size; resembles a big cat with massive horns/fangs. 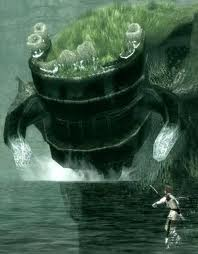 "Paradise floats on the lake... A silent being wields thunder... A moving bridge to cross to higher ground."

Colossus number twelve. It's a massive quadruped hammerhead-shark-water buffalo... thing with hooves and the ability to shoot lightning through its horns. It fights Wander in a large lake. 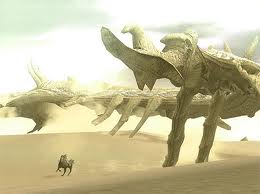 "The vast desert lands... A giant trail drifts through the sky... Thou art not alone."

Colossus number thirteen. Has variously been described as a flying serpent or dragon, and it can also burrow underground.

Cladeds Candor (The Luster of Destruction) 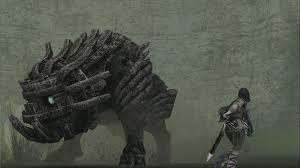 "A guardian set loose... A closed-off city beyond the channel... It lusts for destruction..."

Colossus number fourteen. The other small colossus, for a certain value of "small." 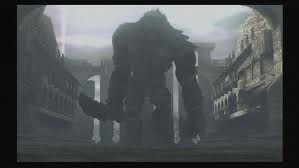 "A giant has fallen into the valley... It acts as a sentry to a destroyed city."

Grandis Supernus (The Towering One) 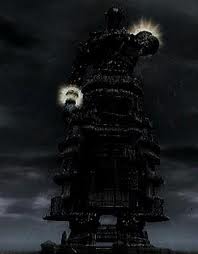 "Finally, the last colossus... The ritual is nearly over... Thy wish is nearly granted... But someone now stands to get in thy way... Make haste, for time is short."

Colossus number sixteen, the final opponent in Wander's way. Instead of climbing a tower to get to this one, it is a tower.