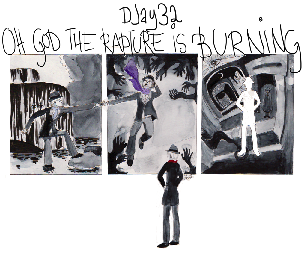 Front cover/Pastiche of The Lamb Lies Down on Broadway album cover, painted by Rappu.
Rapture’s nothing but bullshit. That’s just another scare tactic used by the Christians to get us to convert. It may have worked in the Dark Ages, but we’re civilized now. Now, we OH GOD THE RAPTURE IS BURNING
— The opening lines.
Advertisement:

Rapture is coming; it's not quite here yet, but it's coming. In the meantime, we're treated to a surrealist telling of an absurdist apocalypse in the form of daily journals kept by sixteen-year-old Jordan Dooling. While we may not have salvation yet, we do have endless zombies, ferocious creatures who seem to have been ripped straight from creepypasta, an eldritch universe bleeding its way into our own through floating "Doors," The Blues Brothers that can create entire worlds inside your own head, politics thrown out every window possible, a being that will either control you or abuse you in ways you'll really wish weren't possible, boomboxes on legs that blast dubstep and viking metal endlessly to a dying world, a large slew of gods that can't agree on anything but want to hide it the best they can, a man-sized cockroach with Jesus Christ's head, and we may or may not have the slender man, too.

OH GOD THE RAPTURE IS BURNING is an apocalyptic novel written by DJay32 told through an experimental stream-of-consciousness journal style. It features young Jordan as he uses this opportunity to possibly meet his online friends for the very first time all while struggling to make heads or tails of this rather ridiculous rite of salvation slowly coming into play. The story has received fairly polarizing reception: the experimental style and the unsettling events are not everyone's cup of tea, but those who trudge their way through the fire and flames seem to really enjoy the experience. The logs are primarily a story for The Fear Mythos, but it's theoretically accessible to anyone.

You can find the story here,

and there's a really convenient table of contents here.

You can now download them in a free PDF here!

The Rapture Logs have complementing art by Amelia, Cadet, darkforestwarrior, Logic, Rappu, The Visitor, and Wiratomkinder.

There's also a a character sheet.

There is now a sequel blog called The Cockroach Metamorphosis.

So open up that notebook; let’s find out what Jordan wrote next.
— The intermission, "No Rest for the Rest of Us"

Tropes present in the story include: