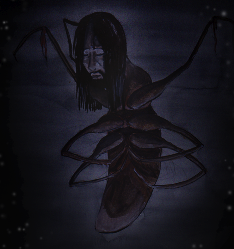 Rapture is dead.
I live in a world with empty eye sockets. Countries grope for light switches, assisted by no one. Nature calls this “politics.” I call it “aftermath.” Then again, I’ve been called much worse. I carry, in my hands, a book larger than life itself. A god handed it to me as a sort of graduation present. We’ve passed the final exams and now it’s time to leap blindly into the real world.
Advertisement:
did you miss me
— The respective opening lines.

The Cockroach Metamorphosis is the second novel written by DJay32 — the sequel to OH GOD THE RAPTURE IS BURNING, making it the second story in the Rapture cycle. It's a story with multiple narrators and multiple styles: Eric Taylor, blind by eldritch means, keeps a book of names as he comes to terms with the fact that he's a god now (his style being traditional prose). Jordan Dooling, arbitrarily chosen one for the apocalypse that had devastated the world so long ago, keeps a journal as he wrestles with the inferno of the human mind (his style being the experimental poetic prose established by the previous story).. Building in the background of these mostly separate narratives, larger and larger threats come the universe's way: From Lovecraftian monsters to beings who exist outside the Totality of existence and perhaps even to Rapture itself. The story is a part of The Fear Mythos.

The Cockroach Metamorphosis can be found here.

So far, it's not shaping up to be nearly as long as its predecessor, though it's certainly getting as much quality art which can be found here if you scroll down and look for "Abon art."

A duck flew by. I sighed and resumed my long walk home.

Tropes present in the story include: