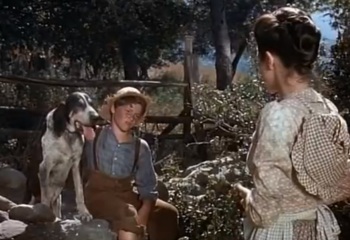 ". Davy Allen is an 11-year-old boy somewhere in what appears to be rural Appalachia. He takes great pity on Buck, a Bluetick Coonhound

owned by their mean old neighbor down the road, Mr. Thornycroft. Mr. Thornycroft has restricted Buck by chaining him to a heavy old wagon wheel, and either has not noticed or does not care that Buck's neck has been rubbed raw and bloody by the chain.

One day Davy is walking by Mr. Thornycroft's house when Buck leaps to greet him at the fence, despite being chained to the wheel. The wheel gets caught up in the fence, leaving Buck hanging. When Davy frees Buck by unhooking the chain, the dog follows him. Davy then decides to pretend that the dog is his.

No relation to dystopic science fiction novel A Boy and His Dog or the film based on that novel.