Literature / The Rise and Fall of the Sky Valley Cult 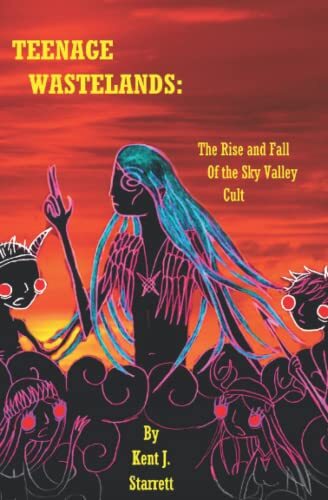 Teenage Wastelands: The Rise and Fall of the Sky Valley Cult is a YA Horror/Fantasy novel by Kent J. Starrett, and the sequel to his first novel, Jackie and Craig.

The story features the surviving characters from the first book, who have been relocated by the S.S.C. to Rhode Island, where they each try to make their own way in the world after the destruction of their hometown, Shadow Creek, by the same organization trying to suppress paranormal phenomena.

Will, now working for the S.S.C. as his grandfather once did, discovers a series of child disappearances across America. Some simply vanish from their houses, cars and roadsides; others run away, leaving cryptic messages about a paradisical valley somewhere in the deep south. Amy works at a pet store, still trying to adapt to the normal world as an autistic person, and Craig is deep into PTSD trauma with near-constant nightmares and visions of a shapeshifting, cloaked figure named Indrid Cold.

It all comes to a head when Craig meets Haley Larson, a girl with a beautiful singing voice, a similarly tragic past, and a few stories passed down from her grandparents about Sky Valley. Will thinks there's something to it, and the newly-formed quartet decides to set out to find Sky Valley; and any of the missing children who might be found there.

What they find is a commune built from a Ghost Town where nobody is above the age of twenty-one, and a permanent fog cloaks the valley from the outside world. Some of the youths have unnatural powers and can control the weather or the elements, while others can read minds and hear thoughts, often with disastrous consequences. Most, however, are refugees, fleeing street life, abusive parents or child exploitation rings. Many have children of their own, and some of the town's warrior caste go on raids and steal various drugs and supplies from other, poverty-stricken rural towns. Craig, Will, Amy and Haley are now all trapped here, under the power of Sky Valley's mysterious leader, a former child-preacher named Tal Raquin.

Known for being strikingly distinct and Darker and Edgier than its predecessor, which was essentially Bridge to Terabithia with acid-trip monsters, as well as heavier emotional stakes and more thoroughly developed characters. Teenage Wastelands has since become the overarching title of the saga. At least one more book is set to follow within the next twelve to eighteen months, called Escape From Concordia.