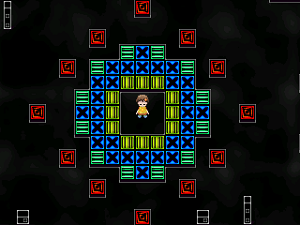 LcdDem (Lucid Dream with every other letter removed) is a Yume Nikki fangame made by the Japanese composer known as Koronba. It's known for its gentler, more serene atmosphere and boasts one of the most well-received Yume Nikki fangame soundtracks out there.

You play as Chie, a girl in a tiny room with no apparent exit excepting a balcony. She can only play her depressing Famicom-esque game NEJI and sleep. Once asleep, she enters a Wide Open Sandbox lucid dream world. Like the original Yume Nikki, there are many hidden effects to find, but the primary goal of the game is to seek the thirteen orbs scattered throughout her mind.

While the game was finished at v0.030, Koronba has removed all traces of the game from various websites (going as far as to delete entire webpages he had complete control over) and has asked that everyone else do the same and never think about or even talk about it ever again. (According to [1]