Literature / A Deadly Game of Magic 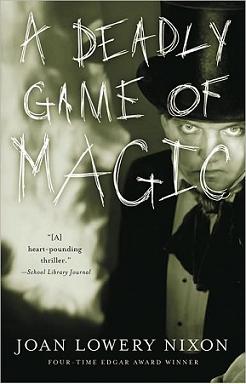 Joan Lowery Nixon, a young adults' suspense/horror writer perhaps better known for The Seance and The Kidnapping of Christina Lattimore (both of which won the Edgar Award), penned this tale of Bo, Teena, Lisa, and Julian, four high school students in Texas returning from a dramatics competition in the middle of a terrible thunderstorm. When the weather, flooding, and their car breaking down forces them to take shelter in a nearby isolated house, things immediately take a turn for the strange, with a very nervous man and his wife who don't seem to belong to the house giving them permission to stay and wait for a towtruck while they "go to a party". Things then proceed to become darker and creepier as the power goes out, the narrator Lisa begins getting the feeling they are not alone in the house, and some mysterious killer begins stalking them...a killer who seems to be a twisted and deadly magician.